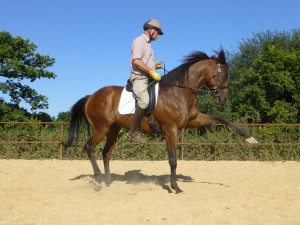 Spanish walk is of great value to many horses and yet often overlooked as a circus trick. It has many benefits as it frees the shoulder, lifts the horse from the for hand and for some can be the start to passage as it is pushed into trot. I am often asked how do I start this exercise and so will publish my method here for all to try.

Spanish Walk is a series of transitions, before the final aids are completely understood by the horse. Believe it or not the very first step to starting a horse to do this, is picking a horses feet out. A horse should pick their feet up on demand, not by us pulling. I always say the foot is attached to their leg therefore they lift it. Start this process by tapping the front of the cannon bone with something solid enough to irritate. Be patient and a little dogmatic but never lose your temper, but persevere till the horse moves its leg. This will probably be a stamp. Praise the horse highly and repeat, soon in a few days you should be able to the hold the horses lifted foot and clean it. This then can be taken into the school.
Starting on the ground.

Hope this helps some to have a go and horses find it enjoyable as well.

I regret very much that so many riders are not acquainted with the book Extérieur et Haute Ecole, written by Captain Beudant.

Therein it may be read that it is only by allowing horses to move on a free rein, and not in holding them in, that success may be obtained. Riders who hold in their horses are insignificant riders and will never advance.
Riders who give their horses freedom are those who will taste the delicacies of equestrian art.

I was in discussion with Frederico Schiappa Pietra Saramago the other day and we discussed many things, but one of the subjects that astonished him, was how few British people know about or have read the works of our greatest past masters. I also notice that when I mention William Cavendish (The Duke of Newcastle) or James Fillis many people have a blank expression on their faces. This is a sad situation as these two people contributed such a large amount in knowledge and development towards the understanding of horse training.

Although William Cavendish fled England during the civil war, to end up having his riding school in Antwerp, at the house that Rubens had resided in. It gave him time to develop his work on horses and allowed him to publish his work “Méthode et invention nouvelle de dresser les chevaux” or “A General System of Horsemanship” as is available in English. His method advanced the techniques used then and which still influence today’s training. He has been rewarded with the title of the father of Shoulder In, of which is still one of the most influential tool in the hands of any trainer

James Fillis developed a huge reputation throughout Europe and Russia by displaying his mastery and easily understood training methods. This being a blog and not a book I invite you all to look him up and discover his exploits. His method of equitation consisted, in his own words, of: “distribution of weight by the height of the neck, bent at the poll, and not at the withers; propulsion by means of the hocks being brought under the body; and lightness by loosening of the lower jaw”. This was a development from François Baucher method who he had trained under. If only this was understood and practised today! How many people who use the ordinary stirrup to ride in, know that it was designed by him and was known as the Fillis safety stirrup. His work “Principes de dressage et d’équitation” or “Breaking and riding” as it’s known in England should be the handbook of all who want to take their understanding of equitation to a level of greater clarity, and like the idea of lightness.

If you know these works you know where I come from with this post, if you don’t please give a little of your time to take in what these masters spent their lives working on to help us.

Riding is the elegant display of structure.

We should only consider this an art, with poetic terms, which can reveal a moment of communion.

How easy to strip bare with a few careless actions cast in anger, they ripple against that we love forever.

The mystery therefore is often quite simple.

“I concentrate mainly on exercising his mind and his memory, in such a way that I achieve what I want: so that it is the horse’s mind which I work the most: the mind of the rider must work perpetually as well, in order to detect all kinds of opportunities to arrive at my goal, without letting any movement pass unnoticed, nor any opportunity unused.”
Antoine de Pluvinel (1552 – 1620) 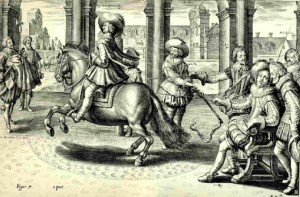